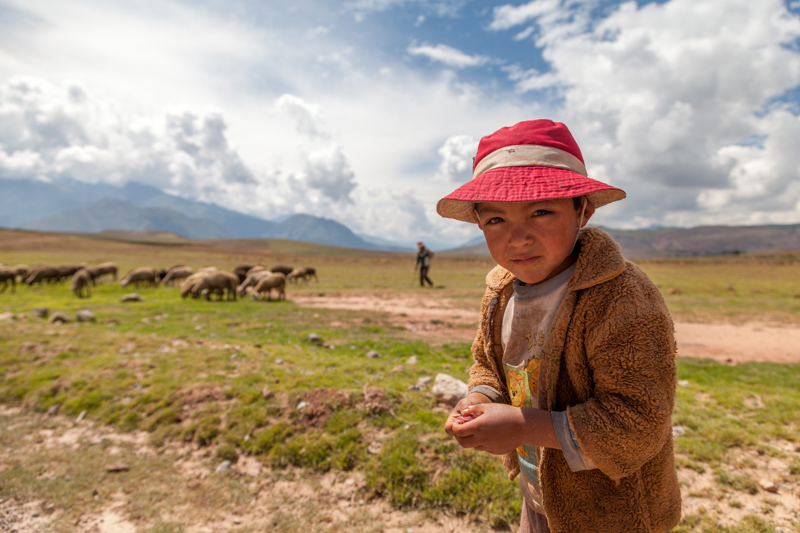 I woke up at 8am to have an early breakfast. Breakfast was included with my stay. They served whole wheat bread with butter and jam, orange juice, and tea or coffee. They had a sign board that said they also served different types of scrambled eggs for an extra cost. I thought that wasn’t part of my breakfast package so I ordered scrambled eggs with cheese for 4 soles and paid the girl who was taking orders. It turned out that the sign was for the tour group who were also there and that eggs were included with the free breakfast.

TIP: Ask if eggs or other food items are part of the free breakfast with your room. It doesn’t hurt! 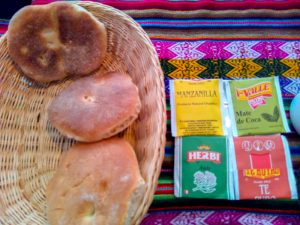 When I got there, my next step was to look for the bus to Cusco and get off at the drop-off point in Maras. But as I was asking around, a cab driver who only spoke Spanish offered me a deal. The deal was to take me to Salinas de Maras, stay there for 40 minutes, then to Moray, again for 40 minutes, then back to Urubamba for 60 soles. I thought it was a bit expensive because David said the taxi from Maras should only be around 30-40 soles. I negotiated but he wouldn’t budge. 60 soles was about CAD$24 so it was still reasonable. So I took his offer. When I got in the cab, the driver introduced himself as Hesus.

We first headed to Salinas de Maras or the salt pans of Maras. We passed the Sacred Valley again. Along the way, we stopped at a view point where I took photos of the Sacred Valley below. There were vendors selling souvenirs. We also passed through several plantation fields that were really nice. I also saw various farm animals like cows and sheep grazing in the fields.

We then got to Salinas de Maras. There was an entrance fee of 10 soles. We were coming from the high side of a mountain and driving down to the salt mines. There’s a nice viewing area of the salt mines where we stopped and I took some photos.

The cab parked at the entrance. There were a few buses and vans there already. I had 40 minutes to walk around and take photos. It was a downhill walk to the mines. There were souvenir shops after the entrance. The Salinas de Maras have been producing salt from the Qoripujio spring for many hundreds of years. It is directed through a system of tiny channels into thousands of shallow man-made pools. Water fills each pool and salt slowly accumulates. When the pool becomes thick with salt, the channel is blocked. Water then evaporates, leaving only the salt behind to harvest. There are about 600 families who own these pools. Each pool can yield about $115 per month. The families also divide the proceeds from the ticket sales to visit these mines. The families typically work for six months in a year. I spent about half an hour at the mines taking photos then headed back to my cab. It was an uphill climb to the parking lot and I was out of breath when I got to the cab. I think I haven’t fully acclimatized.

We then headed to Moray. On the way I saw a flock of sheep grazing near the main road. I asked Hesus to stop so I can take photos. As soon as I started shooting, a young boy who’s about 4 years old ran towards me and yelled ‘Olaaaa!’. When I looked at him, he said ‘Propino?’, meaning he was asking for a tip. I realized his mother who was also there was the shepherd. I told him to hold on and went back to the cab to get some life saver candy. I went back out and handed it to him. He said ‘Gracias’. I took more shots of him and his sheep, then went back to the cab and left. The photos I took of the boy are some of the best ones that I took during my vacation. 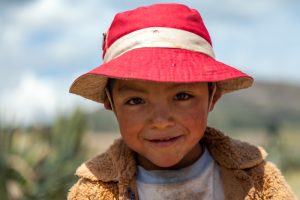 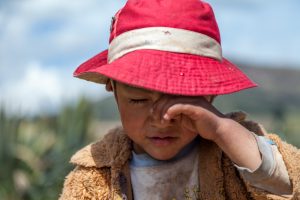 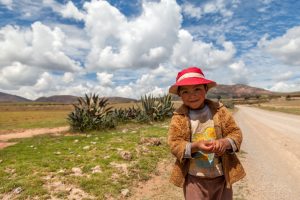 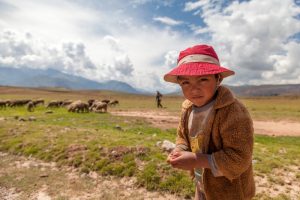 We stopped by the town of Maras. It looked like a ghost town because I didn’t see anybody there. There was a main square and church that seemed to be the highlight of the village. It also had similar looking houses but no soul in sight. I took a couple of pictures then went back on our route.

When we got to the gate to Moray, I had to get an entrance ticket. They only accepted the Turistico Boleto whose price is 70 soles for one day or 130 soles for 10 days. The 10-day ticket included entrance to many other sites so that’s what I got.

Moray was incredibly larger than how I pictured it to be. It also had a good background story behind it. Moray is an archaeological site consisting of three huge pits carved out of the earth primarily used for agriculture. Like many other Inca sites, Moray has a sophisticated irrigation system. Some of these pits are up to 100 feet deep and the difference in temperature between the top and bottom layers can be as much as 20 degrees. Because of that, researchers speculate that Moray was some kind of laboratory where experiments on crops were conducted. Each terrace has these layers (from bottom to top) – big rocks to let water through, gravel, sand, and soil for planting. I spent about half an hour in Moray just taking photos. It was quite a hike to go around all three circles and I was out of breath again when I got to my cab.

We then headed back to Urubamba. We passed the dropoff point in Maras where there are cabs waiting to offer tours of Moray and Salinas. I thought this deal that I got wasn’t so bad after all. At least I didn’t have to negotiate with those cab drivers who were in the middle of nowhere and where I didn’t have a choice on the price that they set. When we got to the Urubamba station, I thanked Jesus for the trip. I thought it was time and money well spent. I then took a collectivo back to Ollantaytambo. I arrived at about 1pm.

I went back to my hostel and removed two layers of clothing on me. It was so hot compared to the previous day. I also got sunburned.

TIP: Use sunscreen. The sun is stronger at higher elevations.

For the rest of the day, I wanted to take photos of the Inca Trail, Templo del Sol, the side streets of Ollantaytambo and more Quechua people. I decided to go see the Inca Trail first. Feeling confident, I took a new route to get there instead of the other routes I’m familiar with. On the way, I saw a little girl who’s about 5 or 6 filling a bottle of water from the waterway on the street and then washing her hands with the water. I asked her if I could take her photo and she obliged. I took a few shots of her and gave her some candy. Then I proceeded to the Inca Trail. 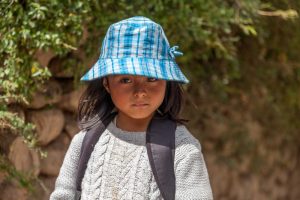 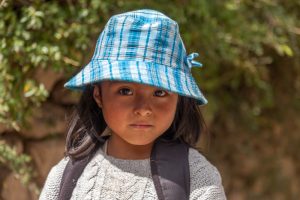 The Inca trail is one of the most famous treks in the world. It is a 4-day, 26 mile (43 km) hike through beautiful mountain scenery, cloud forests, subtropical jungle, Inca ruins and tunnels leading up to Machu Picchu. Many tours start from this entrance located here in Ollantaytambo. I took a couple of photos of the entrance and the trail itself then proceeded to the ruins. 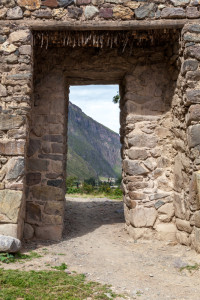 The ruins in Ollantaytambo is on the side of a mountain so you needed to climb again. It’s a nice climb up the ruins though. There were some incredible stone masonry. The higher you went, the larger the stones and the finer the masonry. I was also able to go inside a qolqa or store house where the Incas used to store crops, weapons and other things. It was really windy in the upper part of the mountain and there’s a nice view of the town of Ollantaytambo from there. I took lots of photos of the ruins and spent about an hour in the upper area of the mountain. I then proceeded down the mountain to the Templo de Agua. The fountains and waterways were really nice. I saw a small stream and on the other side, there were sheep feeding on the grass.

After about an hour and a half, I decided it was time to leave. As I went through the exit, there were a few Quechua women and children who wanted to be photographed for tips. I took a few shots and gave them candies. I went around the handicraft market for a while to see if there were other Quechua people I could take photos of then I proceeded back to the main square. David told me earlier that there’s a house in one of the sidestreets that had guinea pigs running around the place. I saw that house on youtube and wanted to see it. Cuy or guinea pigs have been an important source of protein in the Andes since pre-colonial times. In the sidestreets, there are open gates that lead you into people’s houses and you were allowed to look around. I was lucky to find the place I was looking for right away. I took photos of the guinea pigs and their shelf that had skulls on it. It was common practice to place mummies or skulls of dead ancestors on top of shelves in people’s houses. People pray to or consult with their dead ancestors when important decisions are needed to be made. 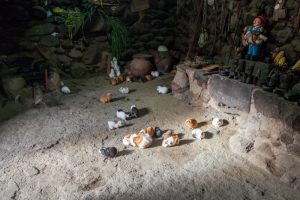 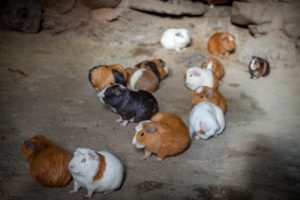 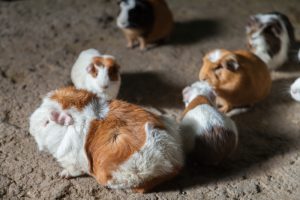 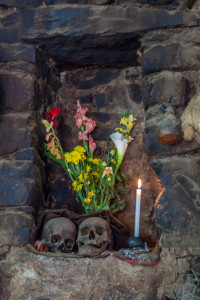 After I got the photos I wanted, I walked a few more sidestreets. I took a few more photos of Quechua women and children. I then started looking for a restaurant that was famous for their cuy. It took me a while, but I found it. I was the only one in the restaurant. When I saw the menu, I saw that their cuy cost 80 soles. I thought that was a lot and decided to order Lomo Saltado instead. Lomo Saltado is an original Asian fusion beef and potato dish influenced by Chinese immigrants from more than a hundred years ago. It took a while to make so the waitress gave me an appetizer of corn and cheese. It was pretty good. 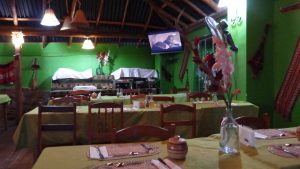 After dinner, I was pretty tired so I went back to my hostel. It was about 6:00pm and the sun had just set. It was a good and productive day. I’ll be checking out the next day and will be catching a train to Aguas Calientes. I know checkout is at 10am and breakfast was from 8:30am to 10 so I decided I’ll wake up at 8:40 and have breakfast at 9am. I also started packing my stuff so I don’t have to rush in the morning. I’ll get a good night sleep finally.

And that was my second day.