I had a good night’s sleep and woke up at 8:40. I got ready and went to the dining area for breakfast. It looked like I was the last one to have breakfast. The place was full of used plates and dishes. No one was there so I walked to the reception and called David. He made scrambled eggs for me and didn’t charge me because he said they were part of my free breakfast. I paid 4 soles for scrambled eggs yesterday, but it’s ok. That’ll serve as my tip.

After my breakfast, I went back upstairs, got ready and checked out of my room. It was 10am and my train doesn’t leave until 12:50pm. I asked David if I can hang around and he was ok with it. I just hanged out the dining area, surfing the web and catching up on messages on my phone. At around 11:40am, I left towards the Ollantaytambo train station. It was about a 20 minute walk from the hostel. I had a sentimental feeling as I passed through the streets, the market and main square. I had a great time here and I’m going to miss this place and the people.

TIP: You can make reservations for the train over the internet at http://www.perurail.com/ then print out your ticket. They check your passport at the entrance and before you board the train.

I asked around to make sure that I’m on the right platform. Everyone spoke Spanish but I had a general idea of what they said. I hanged around in the waiting area until the train arrived. The ticket will say which train you will board and your seat number. It’s not like the subway or a regular train where you can sit anywhere you like. They have window and aisle seats. I was seated in an aisle seat. I don’t even remember choosing an aisle seat during my reservation.

TIP: If you can, get a window seat. The views are incredible.

It was kind of a shaky ride. You were shaking from side to side and the train was running at a decent pace. But the views were incredible. There are nice views of the villages, fields, mountains, the Urubamba river and some Inca ruins along the way. The Urubamba river is a raging river. You can see clouds covering tops of mountains.

The views were so good that you wouldn’t notice that an hour and half had already passed. Before you know it, you were in Aguas Calientes. It was about 2:30pm and it was raining a bit when we arrived. Aguas Calientes is a small town and I still had a general idea of the town’s layout in my head, courtesy of Google map.

The train station was near the place where they sold bus tickets to Machu Picchu. You couldn’t get those online so before heading to my hostel, I purchased a round-trip ticket to Machu Picchu. It was about 57 soles or US$24.

TIP: Get your bus ticket the night before you go to Machu Picchu because there will be a long line if you get it in the morning.

I also bought a large, 2.5 litter of bottled water on the way to the hostel for 7 soles, which was a bad idea. The way to my hostel was uphill all the way and my backpack with the bottled water became heavy. Also, there were other stores near my hostel that sold the same bottled water for only 5 soles.

I found my hostel, Hostal Pakarina, which was about a 10 minute walk from the train station. I checked in and they showed me my room. I settled down and rested a bit. 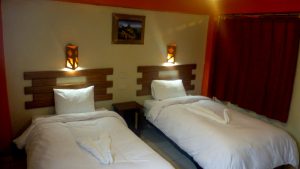 At about 4:30 I decided to walk around town to take photos and just check things out. I also wanted to have an early dinner so I can sleep early. I had to get up early to have breakfast and try to catch an early buses to Machu Picchu. The earliest bus was at 5:30 and Machu Picchu opens at 6:00am. I also signed up to hike Wayna Picchu with the first group at 7:00AM. When I got out it was still raining – and harder too. I went back to my room to get my umbrella. I didn’t want to get sick the day before I go to Machu Picchu and Wayna Picchu. As I walked the little streets, I was also scouting for a potential restaurant where I can have dinner. I saw some prix fix menu deals for 20-30 soles which included soup, a main course and dessert.

I went to the main square and the church in Aguas Calientes to take photos but I didn’t stay out too long. It wasn’t fun taking photos in the rain. I stopped by a tourist information office to get a map of Machu Picchu so I can plan the route I will take for taking photos. I figured I’ll be tired from the hike to Wayna Picchu and I wanted to do the most efficient route to see all the sites. 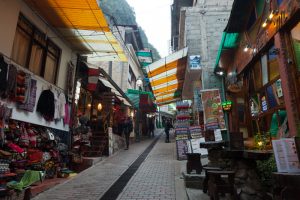 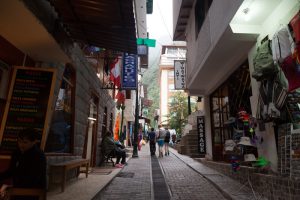 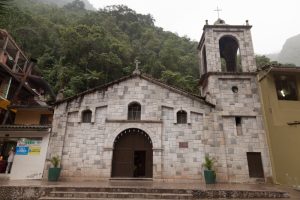 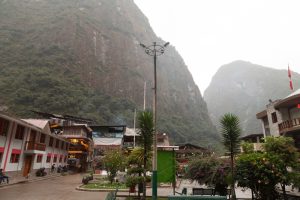 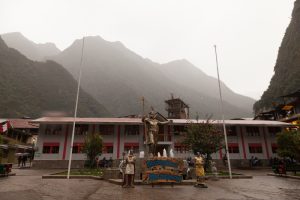 It was about 5:30pm and I decided that I’ll just go to the restaurant near my hostel. I had a list of local foods that I wanted to try but this time I thought I would load up on carbs for tomorrow’s hike. So I ordered a spaghetti which was 35 soles plus 7 soles tax. It wasn’t bad, but I would have gotten a better deal if I got the 20 soles prix fix menu.

TIP: In Aguas Calientes, they charge taxes for the food.

I went back to my room, took a shower and prepared for an early evening. I prepared the stuff I would bring to Machu Picchu and wrapped my camera with a plastic bag in case it rained. I was getting excited. It took me 3 planes, a collectivo and a train to get here and I’m only one bus ride away from Machu Picchu, a place I’ve always wanted to see for a long time. 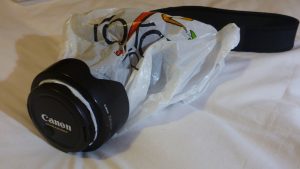