I woke up at around 8:30am and got ready for breakfast. Today I planned to go to Pisac market, then to Plaza de Armas and then, if I was in the mood, to Sacsayhuaman. I wasn’t sure if I was going to Sacsayhuaman because I didn’t know if I still had time and I wasn’t sure how to get there. I heard that a taxi ride will cost at least 10 soles each way. I was debating if it was still worth it even though my entrance ticket was already included with my Turistico Boleta. I also had too many photos of ruins but Sacsayhuaman was interesting because of its very large stones and zigzagging shape.

Breakfast in Hostal Recoleta was typical of the breakfast I had in the other hostels. They had the round bread, butter, jam and tea. They would also serve you scrambled eggs if you asked for them. I also brought a 10 pack of instant oatmeal from Canada and I would prepare 2 packs each morning. Throughout this trip, I loaded up on the free breakfast so I didn’t have to eat lunch and would just have an early dinner. I didn’t order coffee but I saw that when someone ordered it, he would get a small cup of concentrated coffee, then he would just add hot water to it. It was the first time I saw coffee served that way.

After breakfast, I got ready and went downstairs to ask the front office where the collectivo to Pisac was. Another good thing about Hostal Recoleta was that it was just two blocks away from the collectivo station on Puputi. The collectivo from Cusco to Pisac cost 4 soles. The ride was pretty interesting. We passed through many viewing areas of the Sacred Valley, a llama stable, and the Tambomachay ruins, which was also included with my Turistico Boleto. To my surprise, we also passed by Sacsayhuaman, although I wasn’t sure if it was near the entrance. I was able to confirm it coming back to Cusco.

When we got to Pisac, the driver dropped me off and he gave general directions on where the market was. It was in Spanish again but I understood his hand signals. I crossed a small bridge into the town of Pisac. Right away I saw the collectivo station that will take me back to Cusco so I took note of it. Because I didn’t familiarize myself with the town on Google Maps, I had to ask at least three times where the market was. Like other Inca towns, Pisac had small esquinas or streets. Some streets also had active waterways running through it. It seemed like a touristy place because once in a while you will see a hostel or a restaurant so tourists must have stayed there. Pisac also had its own ruins whose entrance ticket was also included with the Turistico Boleta. But I wasn’t going there.

I finally found the entrance to the market. There were tour buses and vans letting off tourists at the entrance. As I entered, I saw a little Quechua girl playing on the ground. I asked her if I could take a photo of her. She nodded and walked to about two inches from my lens. Then her sister joined in on the action. I thanked them and gave them some candy for tip. 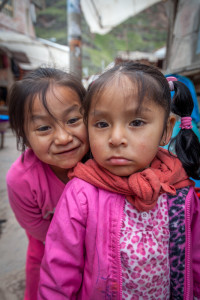 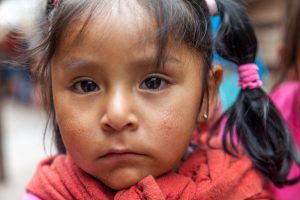 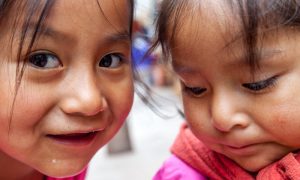 As I started walking around, I realized right away that this was no typical souvenir market with the usual chuyos, wool sweaters, keychains and magnets. This market had much more stuff and I was glad I came. Whenever I saw something interesting, I asked permission if I could take a photo of it. Most of them were ok with it but there was one or two vendors who didn’t want their products photographed. I walked every aisle of the market, not buying anything, just taking photos. Aside from the stalls, there were also some nice places to eat, a bread oven with a Quechua man selling bread and a big cage full of guinea pigs. I also saw Quechua men and women walking around selling packed lunches to vendors. It reminded me of the Philippines.

The collectivo dropped me off across the street from the road to the entrance of Sacsayhuaman. I still had to walk about a kilometer to the entrance. Before I got to the entrance I saw a llama feeding on the grass and a couple taking some photos of it. I decided to join in. The couple were from Taiwan. They said they saw me in Machu Picchu on Sunday. 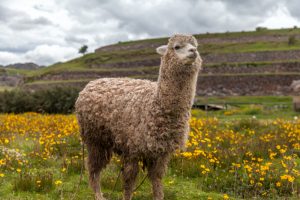 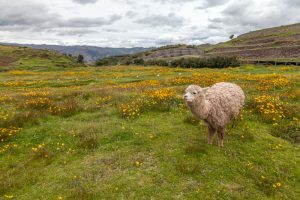 After a few shots, I went to the entrance and presented my ticket. There were tour guides offering their services and Quechua women and children posing for photos. Sacsayhuaman was also known for having a festival during the Summer solstice. There’s a video on YouTube where the priests sacrificed an animal. I headed towards the ruins and started taking photos from different angles. At some points I could actually see the city of Cusco below as well as the Cristo Blanco (White Christ). I headed toward a hill where I could see more of the ruins through my lens. I didn’t spend too much time in Sacsayhuaman because I got too tired from walking. I headed back to the highway after about an hour. This time I caught a bus to go back to Cusco. It was even cheaper than the collectivo, like 1.80 soles. 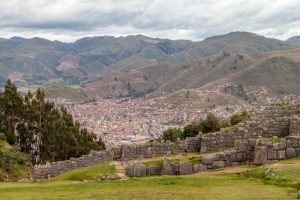 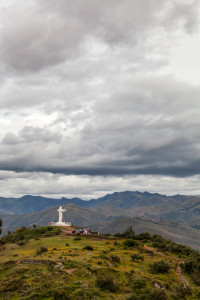 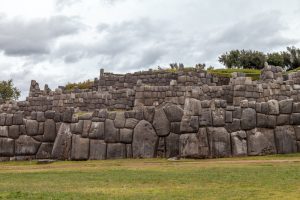 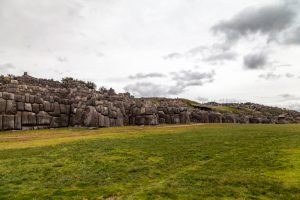 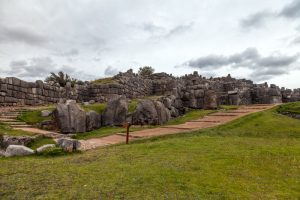 I got back to my hostel at about 3:30pm and just rested. I was tired from all that walking. I think I was exhausted from this whole trip both physically and mentally. It was a lot to take in. I knew I had one more stop I had to make and that was Plaza de Armas. I took note of the sunset times in Cusco before my trip and I knew I had to get going soon if I didn’t want to lose the sunlight. So I left at 4:30pm and headed to Plaza de Armas which was about a 15 minute walk from the hostel.

When I got there, there was an assembly of police men and women by the footsteps of the cathedral. There were two groups of about 50 men and women in uniform standing in formation while their commander stood in front talking to them. That’s one thing I noticed during this trip. I felt safe because the police were always within reach anywhere I went.

The sun was getting close to the horizon and I rushed a bit. I took photos of the main square, the fountain with Pachacuti, the sidestreets, people, and detailed shots of the Cathedral and the Companiya de Jesus. Having two churches so near each other also reminded me of the San Agustin church and Manila cathedral in the Philippines. I spent about 45 minutes at the main square and when the sun set, I headed back to the hostel. 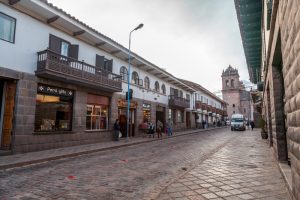 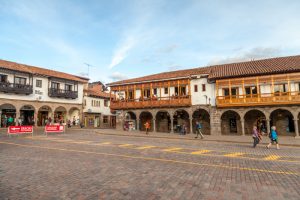 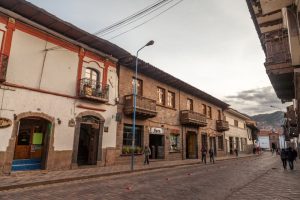 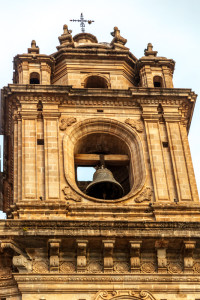 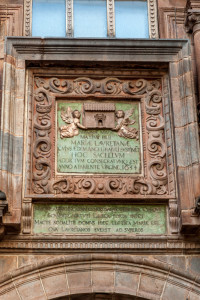 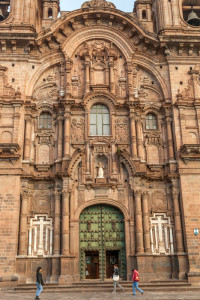 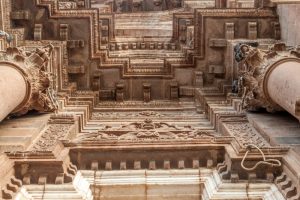 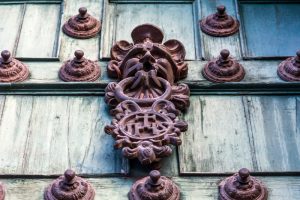 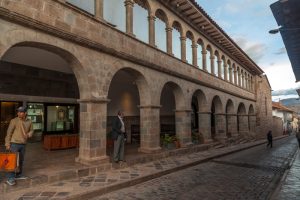 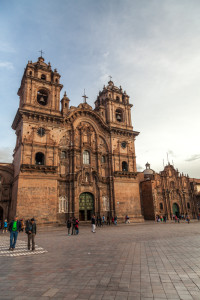 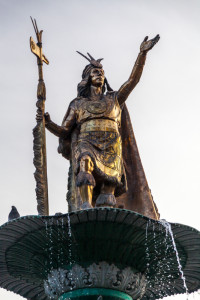 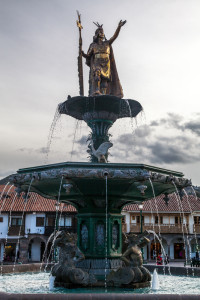 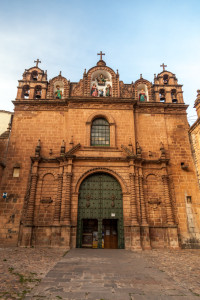 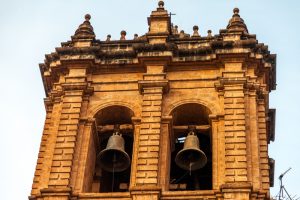 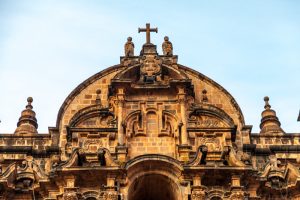 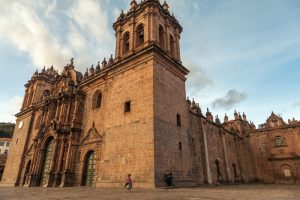 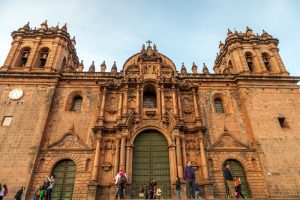 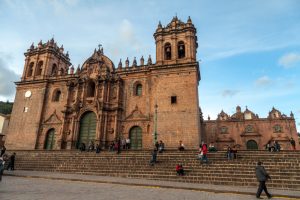 There was a restaurant across the street from the hostel that I wanted to try. It was about 6pm and it was time for dinner. I ordered Salchipapas (Sausage and fries) and Anticuchos de Corazon (Beef heart kebabs). Both of them were really good. I was surprised by Anticuchos. I thought it would be bitter like eating liver but it wasn’t at all. It was like chewy beef. 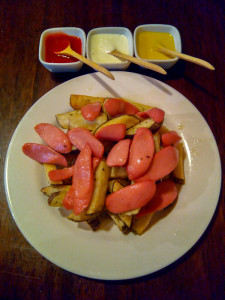 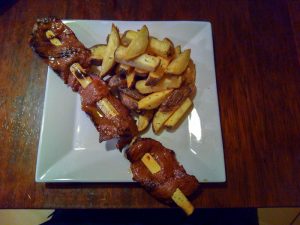 During dinner, I also chatted with an Asian group of 4 people who were from LA. They were nice to talk to and they were doing the 4-day hike of the Inca trail. We talked about our meals. I was going to order the Pollo a la brassa for lunch the next day but they said it was pretty dry. They said however that they were also there for lunch earlier and had appetizer, soup and a main course for only 8 soles. So that was a good tip.

I headed back to the hostel, took a shower and got ready for bed. But before sleeping, I started packing my things. Today was my last full day in Peru and I was leaving for Vancouver the next day. Check out was at 10am so I decided I was going to wake up at 8:30am and have breakfast at 9am. I’ll have another good night’s sleep at last.